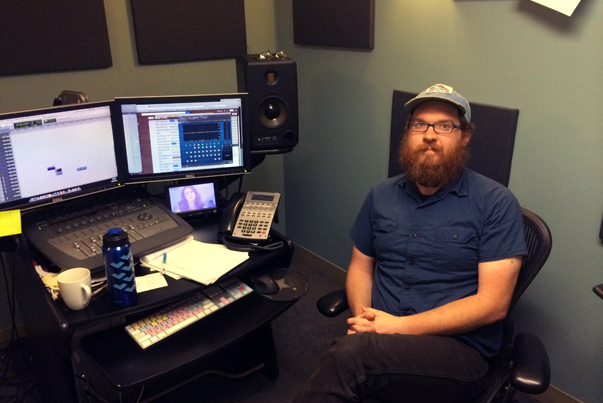 By Levels Audio May 23, 2014 News
No Comments
Supervising Sound Editor, Bryan Parker, has been at Levels for almost five years. I cornered him this afternoon to ask a few questions. Where are you from? Kent, Ohio. Where did you study? I took a bachelors degree in Electro and Computer Engineering from Ohio State but that doesn’t help me much. I’ve worked in live sound since high school. After college I decided to go into sound instead. What is your favorite TV Show? Oh man…. my favorite all time show is The Wire, but the show I get excited about seeing now is Game Of Thrones, I know that sounds predictable. What is your favorite show you have worked on? Teen Wolf for sure. My two favorite genres are comedy and horror because the timing and sound elements that we bring have such a strong impact on how the story is told.  What has been your favorite moment as a Levels team member? [Story told] Okay, suitable for the internet…. Ha. Probably the years when a bunch of people on staff have won Emmys and we have gone together as a group. I also love the days when I don’t see anyone I spend the day making really cool sounds. Alright, finally, what is something that most people don’t know about you? I’m an open book but most people probably don’t know that I build custom motorcycles.
Take Your Project to the Next Level Get in Touch